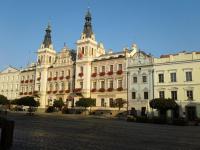 On 10th May 2018  a group of foreign PhD students,Post doctoral researchers and employees were taken on a walking tour    of Pardubice.

Centred around the main city, the tour started off at the centre of the square. Many of the sites of historical importance could be spotted from this square. Knowing which building served as the town hall in a particular period, and why another building had to be chosen for the same purpose in a subsequent period was informative. The guide, Anna, also pointed out an oft-overlooked slab on one of the building walls depicting the story of the man who came to be the founder of the Pernštejn legacy of Pardubice.

The next place on the tour was the castle where the group got to see how the castle is repurposed as a concert venue especially close to summers. While it is common knowledge that Pernštejn castle has many peacocks that strut around the castle grounds, it was funny for the group to see them fearlessly and harmlessly take their place among the audience and probably try to understand why humans had collected to see some people make loud noises on the stage. This was followed by a short walk in the woods surrounding the castle with tidbits of history thrown in every now and then about the castle walls and how they helped secure the premises.

The tour ended at the Green Gate which is one of the major landmarks of Pardubice. Even though it was the official end of the tour, the group were informed that they were standing just 10 metres away from the famed Čoko Bajer which is well known for its excellent hot chocolate. Most of the group chose to taste this hot chocolate to bring the tour to a sweet end.

While this tour was good for newcomers to the city, it was very informative and enjoyable for those in the group who had lived here for years as well.

Vacant position - post-doc in the field Research into the classification methods for detection and...